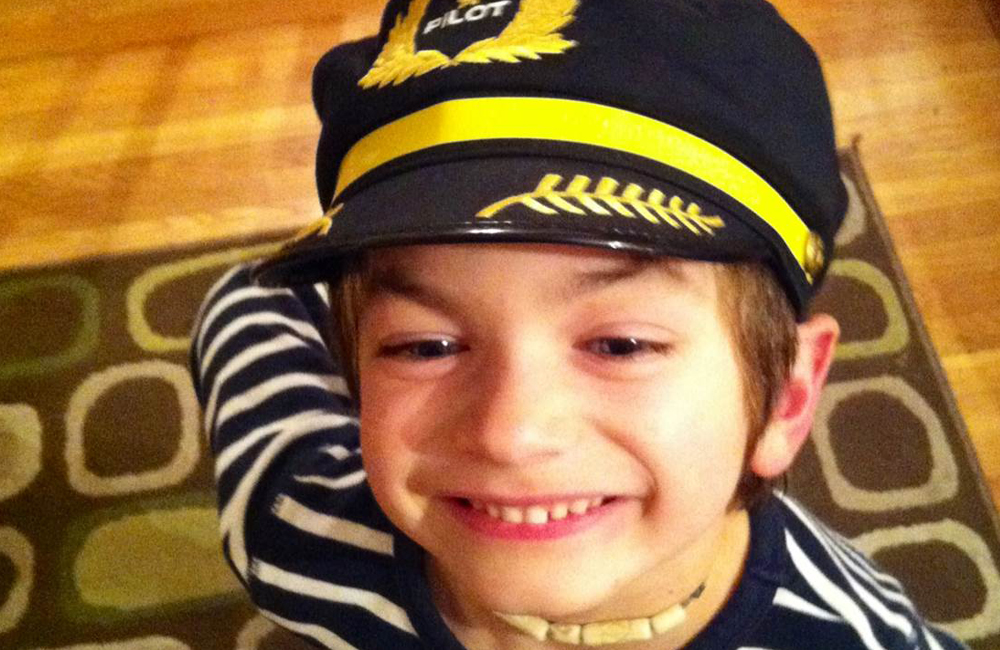 We are also grateful for Victor’s family who continue to sell our ornaments and votives every year. When Victor was treated at Seattle Children’s Hospital, there was no local Diffuse Intrinsic Pontine Glioma (DIPG) research program. Now there is, and our guild donates to Dr. Vitanza’s DIPG research in Victor’s name.

The following message is from Victor’s mom. It exemplifies why we work so hard to raise funds for Childhood Cancer Research at Seattle Children’s Hospital.

Victor was a silly, bright, funny, passionate, curious boy who always had 100 questions for everything and everyone. He loved cars, trucks, airplanes and he wanted to be a pilot when he grew up. He loved people and loved to talk with just about anyone about just about anything! Often times he would start a conversation with someone, on his own, and somehow, he managed to charmed that person in very little time. Victor was well known and well liked in our community. He was spontaneous, warm and loved hugs. He had always been healthy, happy, growing like a weed.

Victor started having night terrors and nightmares in May 2013. He was waking up many times a night and had a hard time falling asleep. I made an appointment for a sleep study, but could only get a spot on July 31st.

Then, in June, his speech became a bit slurred, and he seemed to be stumbling more. We thought sleep-deprivation was to blame. But to be sure, I took him to the ER on Fathers’ day in the hope that we would get our sleep study earlier since his symptoms were getting worse. What happened then was the most shocking experience we have ever had.

The emergency doctor had a CT scan done and they found a mass at the bottom of his brain. We were admitted right away at the hospital to get an MRI done.
The doctors gave us the worst prognosis. Victor had a tumor inside the pons of his brain. It is called DIPG: Diffuse Intrinsic Pontine Glioma. It was located in the brain stem. By their very nature, these tumors invade diffusely throughout the brain stem, growing between normal nerve cells, making them inoperable. They told us Victor would go through treatments of radiation to slow down the growth. But then the tumor would grow back again, and the symptoms would return with a vengeance, at which point there would be nothing left to do. Death would come between 9 and 12 months after diagnosis. Preceded by a complete loss of all abilities. Including the ability to breathe.

DIPG took away Victor’s capacity to swallow, eat, smile, walk, talk, hear, or move in any way. It has taken away his dreams, hopes, and happiness. Along with all of ours, as well. Just as the doctors said, Victor died 11 months after he was diagnosed, on May 14th 2014.

What our family has gone through is nothing anyone could imagine. We were completely powerless to help our beloved son. All we could do is hold him and tell him we loved him. We were never given a glimmer of hope. Not an ounce of optimism. Victor was terminal upon diagnosis.

This illness destroys 300 families per year, in the USA alone. Yet, treatment for it has been the same for over 30 years. Very little progress happened because funding is very limited.

No one should ever go through what our family has gone through. Today we raise money and awareness so that one day we find a cure and an end to this horrible disease.